“Fighting dragons is what heroes do“

In her recent book Thieves of State, Sarah Chayes highlighted the largely overlooked nexus between corruption and acute security crises. She elaborated on this theme as the keynote speaker at a side-event during IACA’s fourth Assembly of Parties (AoP) in Vienna in December 2015. In a separate interview with IACA at the AoP, she talked about the reaction to her book, reframing the corruption issue, and finding the vulnerable points of corrupt networks.

Tell us first of all about your book and the reaction to it. Was there anything that really stood out for you?

A couple of things. I did get the sense that for some people I was articulating something that they sort of understood but hadn’t quite put together, like joining dots. But secondly, some outreach I got surprised me. For example I was contacted by the U.S. Department of Commerce, which had not been one of my targets. My targets had been the more predictable foreign or defence ministries. Then I realized “but of course!” There’s a hugely important issue for the private sector and in particular trade promotion on the part of western countries that consider themselves to be non-corrupt. They will often be pushing for good deals for their industries in countries that are corrupt, and good deals are achieved in a sense by colluding with corruption. Or private sector actors are thinking only about how to navigate corrupt environments rather than how their interaction with these environments is in fact enabling and facilitating the strengthening of kleptocratic networks. So these companies bear a certain degree of responsibility for the negative outcomes that may result, including security outcomes.

Corruption is a huge problem but we’re not talking about it. Why not?

Good question! I think partly the way it’s been framed in the past has been an incredible doze. It’s been phrased as an efficiency issue or a brake on development, or as introducing economic inefficiencies into the system. The human dimension of it has been ignored. So people miss the way the indignation that corruption generates is responsible for some very extreme reactions on the part of populations, be it revolutions or joining extremist movements.

I think corruption has been misframed, and as a result of the misframing it’s always seen as a secondary consideration. So whatever your priority is as a private sector actor or a public official – whether it’s delivering a health programme in a developing country, having good diplomatic relations with your counterparts, or security – trumps corruption. But what people haven’t understood is that they will never achieve their immediate imperatives if they ignore corruption.

Does it make sense to fight corruption at the national level, or does the approach need to be more international, more global?

There’s a very important international dimension to corruption. In some cases kleptocratic networks in a given country spill over borders. And some of the countries that consider themselves to be uncorrupt are in fact the ones providing the most services to corrupt officials overseas, so you could even say that the network extends to western developed nation service providers. By that I mean banks, real estate companies, lawyers, et cetera.

However, it’s very important to understand the dynamics of corruption on a country or regional basis, because they’re very different. Which particular elements of state function a kleptocratic network has repurposed is going to differ from country to country. The critical revenue streams that are being captured will also differ depending on what the resources are and the historical background of the country. So you also need to have some granularity in your understanding of the phenomenon on a local basis.

Tactically, is it better to fight corruption by going after the big fish, or rather to start nearer the bottom? What’s the best approach in different contexts?

Tactics need to be tailored to the specific environment under consideration. The first thing you need to do is understand that environment, and that means doing a really careful structural analysis. What are the elements of state function that have been repurposed by a kleptocratic network to its benefit? What are the elements that have been deliberately hollowed out? Which people or institutions are the key enablers and facilitators of corrupt behaviours? What does the corrupt network look like? That means creating network diagrams, which anti-corruption institutions rarely do, and then thinking really strategically about what the weak link is. What is the vulnerable brick in the wall that could bring the whole wall down?

How important a role can civil society groups play?

Civil society is one of the most powerful potential allies for anti-corruption reformers in a severely corrupt country. But it is often extremely vulnerable and under-resourced, and often misunderstood. “Civil society” has come to be a euphemism for NGOs that are specialized in a certain field, such as anti-corruption. And I think it’s important to understand that civil society is a much broader concept than that.

There are two really important roles I think civil society can play. One is to support investigations and expand the reach of official anti-corruption institutions. The other is to help remove a degree of complacency, a “this is the way things are done” attitude that you often see among a population in an acutely corrupt country. Civil society can say “no, this isn’t how it’s done in our country”, and give ordinary people ideas for how to kick back against corruption.

The problem is that there’s very often a belief in the west that local civil society is the (sole) answer to corruption. So you definitely need to enlist civil society on your side, but you shouldn’t overestimate what it’s able to do all by itself.

When we talk about the sort of anti-corruption training and education that IACA provides, what is the right mix of theory and practice?
I think the conceptual background is important, and in particular the reframing of the issue. If you make corruption one of these odourless or anonymous structural forces, that’s not very helpful. And if you provide straight technical training in a non-differentiated way, participants are never going to get anywhere because they’ll never have enough resources to use that technical expertise effectively when they are up against a thoroughly integrated corruption network.

It’s more useful to help anti-corruption professionals understand how corruption is driving some of the existential threats their country may be facing, and understand the structured and network dynamics of how corruption works in their country. This will help them to better tailor and focus the limited resources they have. If they’re able to think where the vulnerabilities are in their country’s corrupt networks, they can think how to focus their energy on those vulnerabilities so that with a relatively small amount of effort they can achieve a greater effect.

What is your motivational message, your words of advice for anti-corruption professionals who might be feeling discouraged about the size of the problem?

They are the greatest public servants of all. They may sometimes feel like they’re fighting a dragon, but fighting dragons is what heroes do. So it’s heroic what they’re doing on behalf of their societies. The advice I would give them is to work very hard to find allies, because you can’t do this alone. You have to identify and cultivate allies within your own society and also outside so you can bring supporting fire to bear when you go to battle.

How optimistic are you about the fight against corruption? If you update your book in five or ten years from now, will you be painting a brighter picture?

I think we’re in a nadir at the moment. I think we’re in a very negative place in terms of corruption, and it’s partly because of the exaltation of money as a social yardstick that’s been taking place around the world since about the mid-1980s. But there’s usually only one way you can go from a low point, and that’s up. I’m getting a feeling that at least some of the arguments about this nexus between corruption and acute security crises are beginning to make some headway and people are starting to wake up. You’re seeing a number of country leaders take up the corruption issue, and in many cases these are leaders of countries that are providing corruption services. Once they make this a plank in their political platform, they’re going to be held to account in their own country. So I must say that I think we’ll be looking at a slightly better situation in five to ten years – assuming that everyone does their part.

Sarah Chayes is a senior associate at the Carnegie Endowment for International Peace in Washington, D.C. A former reporter, she lived in Afghanistan for almost a decade from 2001 and served as special adviser to the chairman of the U.S. Joint Chiefs of Staff. She is an expert in South Asia policy, kleptocracy and anti-corruption, and civil-military relations. Much of her research and writing focuses on correlations between acute public corruption and the rise of militant extremism. She is the author of Thieves of State: Why Corruption Threatens Global Security (W. W. Norton & Company, 2015) and The Punishment of Virtue: Inside Afghanistan After the Taliban (Penguin Press, 2006). She was recently a lecturer in IACA’s 2015 – 2017 Master in Anti-Corruption Studies (MACS) programme. 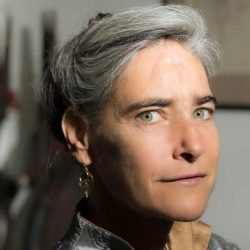 Sarah Chayes is a senior associate at the Carnegie Endowment for International Peace in Washington, D.C. A former reporter, she lived in Afghanistan for almost a decade from 2001 and served as special adviser to the chairman of the U.S. Joint Chiefs of Staff. She is an expert in South Asia policy, kleptocracy and anti-corruption, and civil-military relations. Much of her research and writing focuses on correlations between acute public corruption and the rise of militant extremism. She is the author of Thieves of State: Why Corruption Threatens Global Security (W. W. Norton & Company, 2015) and The Punishment of Virtue: Inside Afghanistan After the Taliban (Penguin Press, 2006). She was recently a lecturer in IACA’s 2015 – 2017 Master in Anti-Corruption Studies (MACS) programme.